skip to main | skip to sidebar

One novice, Tim, summed it up this way:

A good time was had by all. Especially, it seems, by the ladies.

Which hints at an important aspect of the chapter - of the sixteen spaces we reserved at the range, a healthy majority were taken up by women. When Shooting Liberally was not busy shooting down bullseyed targets, they took turns shooting down gender stereotypes.

It felt quite odd at first, since the shooting range not only had many posters with sayings like, "Guns don't kill people, bullets kill people," and "Forget 911--I dial .357," but also a portrait of George W. Bush proudly displayed over the cases of ammunition in the office. Also, the heavy report of high-caliber handguns being fired in the range couldn't help but make you jump.

John, the safety instructor, had enough tattoos to moonlight at Coney Island, but he was friendly and patient and thorough. He sat all 16 of us in school desks in a side room to run us through weapon handling procedures. Then he handed out rifles to everyone. It was quite something to see a bunch of people who looked like they were in study hall, brandishing weapons.

Despite pre-game jitters, once on the range with the smell of gunpowder the card-carrying progressives took to it like fish to water. The women in the group were especially keen. Two or three ran through their clips of fifty rounds in no time and came out to buy more.

Afterward, we compared our paper targets and, surprisingly, most everyone had grouped their shots tightly in the center. It was exhilarating.

We all agreed that we had to do it again. And though we didn't talk about it much, I think we all felt better able to hang onto our democracy.

Which brings up an interesting issue - all of our Shooting Liberals are no slouches to the second word in the name. These are real lefties, and that includes believing in sensible gun control as well as responsible gun ownership. However, the last time we posted on this topic, we got a fair amount of comments from folks whose view of the 2nd amendment has changed a bit due to the radical nature of the Bush administration. Do you in the comments have any thoughts on this matter?
Posted by Casey and Justin at 9:50 AM

Great write up! I can't wait to go again tonight!!!

Hi, I am a student at the Columbia University Journalism School in New York, I am writing an article about "shooting liberally" and have attended a fun session with Stanley Sherman in NYC.

I really need a couple of photos for my article. Please could someone send me the high definition originals of Stanley at the range and the new logo?

You guys should also check out our similar group:

Its a great idea to take the issue of guns away from the far right. We hope you will come over and join us on our forums!

Keep up the great work.

Hey everyone. If you are interested, The Liberal Gun Club is having a "postal match" where you compete by printing up some targets and shooting at your own range on your own time. There are some prizes to be given. Come on over and join the fun:

Easier Link - if I did it right 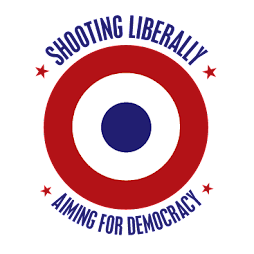 What Is Shooting Liberally?

A social gathering ready to arm you for an evening of progressive target practice. Perfect for the First Amenment enthusiast ready to go to Second.